Book Guide for the Recently Deceased 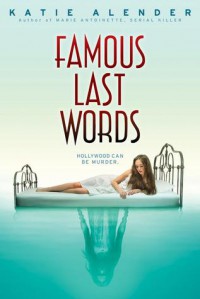 [Very minimal spoilers] Famous Last Words is a book by Katie Alender, an author known for other novels such as Marie Antoinette, Serial Killer. Her books are fast but long reads, a long amount of time packed into 100-200 pages. This is the first book of hers I've read, and I think I'd read more. They aren't amazing, but they are good.

Famous Last Words is set in common day, and features a teen girl, who's actually imperfectly perfect. She seems like a real person, three-dimensional with all the faults and pros any functioning human would have. Her name is Willa, and she has been playing with the supernatural. After her she moves with her mom to her stepdad's, a famous Hollywood director with lots of dough, she is miserable. She has to go to some fancy school, where she only seems to be accepted by one person. Meanwhile, a killer has been on the lose, and she may of accidentally taken the notebook of the school creep, which leads her down a path she probably didn't want to be on. Her fiddling with the serial killer's plans and trying to figure them out mixed with her supernatural dabbles mixes for a horrible combo.

I read this book on a plane, and to be honest, I'm glad I did. It was entertaining. The beginning starts off fast, and I'm not sure if you enjoy that, but I do. I hate when a book has a complex beginning just to tell an easily explainable story. Though, that's besides the point right now.

The story develops well, and isn't rushed. The characters are introduces and the author takes care into making sure each is well-developed. That's something I appreciate and don't really expect when reading novels for teens. YA books like John Green's or Rainbow Rowell's are ones I have higher standards for. YA books that are more on the edge of just general fiction or K-8 oriented I don't have really any for, as long as it's a good book, being that the words 'book' and 'good' are used lightly. Anyways, I was pleasantly surprised. You can see how each character deals with what is happening and how they change their ways according to what is happening, something very realistic that real humans do. You can find this especially in the main character, because she is the one dealing with the most problems, like grief, supernatural activity, and loneliness. She's also a relatable character in many ways, at least for me, and it's not obvious that Alender wants you to relate to her, therefore her positive attributes aren't forced. It's kind of up to the reader to interpret her morals and pros and cons as the book continues. This is a good way to involve the audience, then giving them a mold and telling them they can only fill it with one thing - that said character they wrote.

The idea behind the book is also very good, it's creative and modern whilst staying true to it's horror roots. Now, I don't get scared very easily. I mean, heck - I laughed at The Ring and found Candyman and The Shining to be two movies to casually watch and enjoy, not something to toil over late at night and have nightmares about. Maybe, though, you'll find it scary. Regardless, the killer in the novel is pretty obscure and creepy during the flashes Willa has of scenes between said murderer and his victims. This person [the murderer], even though they aren't revealed until the end, is extremely well developed and therefore adds to the plot of the book. You know what's happening even if Willa isn't at the actual killing, and you are giving foreshadowing. This is helpful and creates great plot development throughout the whole novel and leads up to a great resolution.

Now, I have glorified this whole book for you. But here comes the bad news, and the reason why I didn't put it under the good section on my blog.  The plot twists. They are ridiculously obvious. About 40-50 pages in, I knew what was going to happen, and what the book wanted to make you think. Sorry, Alender, you just made it too obvious! It might of been purposeful, but I suppose not. Maybe she thought we just wouldn't get what was happening? But anyway, that's something to work on. As this is the first book I've read of this author's, I don't know if this is the rule for the rest of her novels.

To wrap this up, because it is way too long already, this is a good book. I do recommend it. It is just for my own opinions that I put it in the category I did. I may change it though, if I decide to pick it up for another read. Anyways, definitely pick this up if you see it at a book store, or check it our from a local library.

The Perfect Nanny by Leila Slimani

Vincent and Theo: The Van Gogh Brothers by Deborah Heiligman